BAYREUTH, Germany — About 150 years ago, in a megalomaniac’s coup, Richard Wagner built a theater on a hilltop here in northern Bavaria.

His immense, complex, innovative operas had never been presented as he imagined them. If he wanted them done right, he concluded, he would have to do them himself.

But when the Bayreuth Festival Theater opened in 1876, with the premiere of his full “Ring of the Nibelung” — a four-opera, 15-hour mythic tale about nature and power with a cast of gods, warriors, dwarves, giants, talking birds and spitting dragons — Wagner was still unsatisfied.

Among the most intractable (and inadvertently laugh-inducing) problems were the magical effects he called for: girls frolicking in the depths of a river; transformations into serpents; Valkyries riding through the air on horseback. Even now, with 21st-century stage technology, what Wagner makes musically persuasive has struggled to be visually and dramatically so.

In his intriguing, insightful new production of the “Ring” at the Bayreuth Festival, the young director Valentin Schwarz has dealt with those problems by sidestepping them entirely.

Schwarz’s acidic, passionately performed, contemporary-dress version is a “Ring” without magic or nature, in which all the characters are human, their relations even more tangled than usual, and all the events take place on a single estate.

While in the libretto, the dwarf Alberich briefly turns himself into a lowly toad, that is here just a metaphor; it’s mentioned in the text, but nothing happens. The mighty Valkyries don’t fly through the sky, but bray around a waiting room in spike heels, flame-colored nouveau riche outfits and cosmetic surgery bandages. Siegfried, the flawed hero, isgiven a sword — or at least a shard that resembles one — but it does nothing supernatural. (The weapons here are mostly handguns.)

This is all of a piece with the demythologizing trend in Wagner stagings over the past 50 years, especially in Europe. The most influential ones over that period have been made in the shadow of George Bernard Shaw’s interpretation of the “Ring” as an allegory of anticapitalism, with the action set more or less in the present and the gods depicted as members of the modern upper classes, the characters’ nobility and valor as mostly sham.

That was also the case with the last Bayreuth “Ring,” by Frank Castorf, which ran from 2013 to 2017. But compared with Castorf’s gleefully baffling staging, which often abandoned coherent storytelling altogether, Schwarz’s is fairly straightforward in its account of the codependence and acrimony running through a family. There are whiffs of daytime soaps in the harsh vividness of the visuals and acting, and a bit of “Succession,” too.

If the “Ring” is an allegory — a reach for some conservative operagoers, but a given for many directors — the conceptual anchor of a production is the nature of the gold, the theft of which from the Rhine, in the opening minutes, is the sin that sets the epic plot in motion.

The gold — and the powerful, toxic ring it’s molded into — symbolizes the commodity that the onstage world values most. For Castorf, it was oil, corroding political and social relations as it circulated through the globalized economy. For Schwarz, picking up on the magic apples the libretto says the gods require to retain their freshness, it is youth, innocence, children.

His “Ring” is full of adults obsessed with appearing younger — through exercise, plastic surgery, absurd attempts at hip clothing — even as, more than in most stagings, they visibly age over the cycle.

In Schwarz’s most original and inspired idea, the stolen gold is a young boy (Erik Scheele) whose abduction by Alberich (Olafur Sigurdarson) embodies a society curdled by its attempts to outrun death.Credit…Enrico Nawrath

This obsession tips over into ominous hints of child trafficking and abuse; the slaves of Nibelheim are here a roomful of identically dressed blonde girls drawing at tables. (The girls aren’t overtly hurt, but they’re clearly being hoarded.) The dwarf Mime’s workshop is a creepy tea party and puppet theater for raggedy homemade dolls. And in Schwarz’s most original and inspired idea, the gold is not a bit of metal, but an actual young boy whose abduction embodies a society curdled by its attempts to outrun death.

The life cycle is the focus from the beginning. The libretto sets the start of the “Ring” beneath the flowing waters of the Rhine, but Schwarz instead shows us an animated projection of a womb, in which twin fetuses are frozen in a gesture somewhere between love and combat.

That image of a family’s foundational claustrophobia is a key to all that follows, as the action plays out in and around the gods’ home, Valhalla. (The forbiddingly sleek, spare sets are by Andrea Cozzi, the evocatively changing light by Reinhard Traub, and the fiercely trashy costumes by Andy Besuch.) The giants who, in the libretto, have been conned into constructing the lair are here chic architects of a glassy expansion. Alberich now isn’t of a different race than Wotan, the king of the gods, but is his less successful brother.

Michael Kupfer-Radecky, left, and Stephen Gould (who was replaced last week by Clay Hilley) in “Götterdämmerung,” in which the family property is now inhabited by even more depraved people.Credit…Enrico Nawrath

The all-knowing Erda and the brutal Hunding are part of the estate’s omnipresent, watchful servant underclass, which shines the silver as the main characters suffer. Later, Mime and the dissipated Gibichungs, Gutrune and Gunther, are ever more depraved inhabitants of parts of the property, long after the gods have passed on.

The role of Wotan, his hands ever pawing at women at their most vulnerable, is shared by the sturdy Egils Silins (in “Das Rheingold”) and the brooding Tomasz Konieczny (“Die Walküre” and “Siegfried”). In the second act of “Walküre” last week, Konieczny had an appropriately bourgeois accident — the back of his Eames lounge chair broke off, and he tumbled to the floor — so he sat out the third act, giving Michael Kupfer-Radecky the opportunity to jump in, superbly, a few nights before his manic turn as Gunther.

In “Siegfried,” the title character was sung by the tirelessly secure Andreas Schager, subtly unfolding the lovable side of a drunken degenerate. In “Götterdämmerung,” Clay Hilley was a last-minute replacement as Siegfried, and he would have been impressive even under less dramatic circumstances.

“Die Walküre” was notable for Klaus Florian Vogt’s pure, rapt Siegmund and Lise Davidsen’s tender, surging Sieglinde, by far the most vocally resplendent performance of the week. Daniela Köhler sang brightly in the short but daunting Brünnhilde part in “Siegfried”; in the much longer “Walküre” and “Götterdämmerung,” Iréne Theorin acted with intense commitment to the staging, but her sizable voice wobbled under pressure.

Lise Davidsen, left, gave the most vocally resplendent performance of the week alongside Klaus Florian Vogt in “Die Walküre.”Credit…Enrico Nawrath

Stepping into the production just a few weeks ago to replace a sick colleague, the conductor Cornelius Meister led a solid, sensibly paced, somewhat faceless reading of the sprawling score.

For all that is clear, even blatant, about Schwarz’s staging, there is much that is memorably, lyrically ambiguous. Appearing periodically throughout his “Ring” is a small, glowing white pyramid in a glass cube. Characters occasionally carry it, and it sometimes sits next to furniture or in the corner, but it’s never explained or dwelled on. It is whatever you think it is: a model of the pyramidal addition to Valhalla; a stylized sword or spear tip; purity; energy; antiquity; aspirations before and beyond the complications of reality. It is, in essence, a line of poetry, enigmatic and evocative.

Similarly, drawings of stereotypically Wagnerian faces with winged helmets keep popping up — they’re what the girls are making in Nibelheim — before taking form as the red masks carried by the sinister crowd of vassals in “Götterdämmerung.” Do they represent the stultifying weight of tradition in presenting the “Ring”? The dark side of German nationalism?

Thankfully, it’s not specified — nor is the meaning of the omnipresent horse figurines and toys. The most important horse in the cycle, Brünnhilde’s Grane, is, like the gold, here a real person: a tall, dependable, silent aide with an equine mane and beard.

There were indelible images throughout the week: the giant Fafner (Wilhelm Schwinghammer) moldering at home on his deathbed; Alberich (Olafur Sigurdarson) and Hagen (Albert Dohmen) confronting each other on a palely lit stage, empty but for a punching bag that Hagen attacks, then forlornly embraces; Hagen’s slow, mournful dance as he leaves, waving Alberich’s leather jacket like a bullfighter.

And at the end of “Die Walküre,” we don’t see Brünnhilde asleep in a ring of fire, but rather the final attempt of Fricka (Christa Mayer) to reconcile with Wotan, her husband. He walks away, leaving a single candle burning as the curtain closes, a nod toward the libretto’s fire that captures the emotions of the music and the moment in a fresh light.

But while the abandonment of enchantment is often illuminating, occasionally it ties Schwarz in knots. Since there is no potion to cause Siegfried to forget — and cruelly betray — his love for Brünnhilde, their ecstatic duet earlier in “Götterdämmerung” needs to be staged, unconvincingly, as a fight to give motivation for his bitterness. And both Theorin and the staging run a bit out of steam in the closing, apocalyptic Immolation Scene, with Brünnhilde wandering aimlessly, then cradling Grane’s decapitated head as she lies down next to the murdered Siegfried at the bottom of the estate’s drained, dirty pool.

Instead, the real coup of “Götterdämmerung” is the realization, earlier on, that the kidnapped Rheingold-boy has grown up to become the embittered, ambivalent Hagen. Painfully, in Schwarz’s staging, we see him treat Brünnhilde and Siegfried’s young child (an addition to the libretto) as callously as he was — the wheel of fear and abuse continuing to turn.

And the production’s final image is a reprise of its first: again, twin fetuses, but this time in seemingly peaceful embrace. Is that peace lasting? Or will birth inevitably bring about a renewal of resentment, betrayal and violence? With admirable restraint, Schwarz doesn’t define whether he thinks a sick world is capable of change.

Through Aug. 30 at the Bayreuth Festival, Germany; bayreuther-festspiele.de.

‘Shrinking’ Review: On the Couch With Harrison Ford 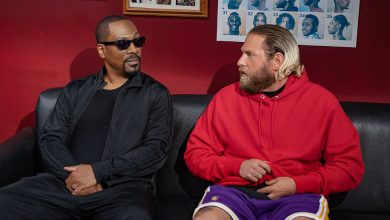