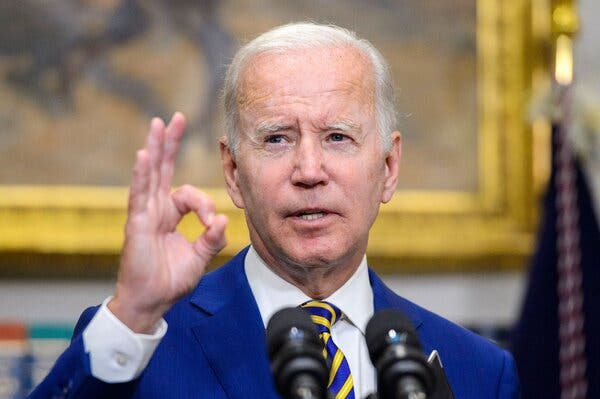 It’s official. President Biden announced yesterday that the federal government would cancel billions in student debt. The move, which promises to offer widespread relief for tens of millions of Americans, has ignited a fiscal debate and raised the possibility of opening a deep political rift that could rival those created by last year’s stimulus check scuffle and the 2008 bank bailouts.

The program, in a nutshell: It would forgive up to $20,000 per borrower, so long as the person earned less than $125,000 a year, or is in a household that earned less than $250,000. Current students are eligible, though if they were claimed as dependents, that would cap their relief.

Because Biden used executive action instead of going through Congress, legal challenges are expected. (That said, it isn’t clear who would have the standing to file a lawsuit.)

Praise came from some. Liberal Democrats and labor advocates, who had pressed Biden to fulfill one of his campaign promises, lauded the announcement. But some Biden allies said the president didn’t go far enough. They wanted $50,000 in relief per borrower.

Even some in the business community offered some support. The C.E.O. of the National Housing Conference, David Dworkin, called the initiative “one of the most consequential administrative actions for housing in a generation,” and said it could bring millions of new home buyers into the market.

Criticism came from others. Much of it — including the cost of the program and its effect on inflation — was captured in a Twitter thread by Jason Furman, a former Obama economic adviser who has opposed the move. “Pouring roughly half trillion dollars of gasoline on the inflationary fire that is already burning is reckless,” he wrote.

Others argue that the move doesn’t address the underlying problem of soaring higher-education costs, with some worried that universities may raise tuition and students may borrow more if they believe debt could be canceled again. Some experts say a better solution is making student loans erasable through bankruptcy.

And then there is the criticism that student debt cancellation is a giveaway to the wealthy (though the highest amount of relief will go to those who qualified for Pell grants for low-income families). That point was echoed by both Democrats and Republicans: Representative Tim Ryan, Democrat of Ohio, who’s locked in a tight race for an open Senate seat there, said the move sent “the wrong message to the millions of Ohioans without a degree working just as hard to make ends meet.”

In some ways, that backlash echoes the outrage over aid to Wall Street banks after the financial crisis, which helped create the Tea Party movement. But some polls so far suggest that a narrow majority of Americans favor some level of student debt relief.

Biden has acknowledged the polarized response. “I understand that not everything I’m announcing today is going to make everybody happy,” he said yesterday. “But I believe my plan is responsible and fair.”

California moves to ban the sale of gasoline-powered cars. Today, state officials are set to adopt rules that would require all new vehicles sold to be free of greenhouse gas emissions by 2035. Given California’s size and influence on other states, that could affect a third of the U.S. auto market.

Twitter’s whistle-blower will head to Capitol Hill. Peiter Zatko, Twitter’s former security chief, will testify before the Senate Judiciary Committee about his claims that the company failed to protect users’ data. Twitter’s C.E.O., Parag Agrawal, pushed back against the accusations yesterday in a meeting with employees.

Amazon will shut its primary and urgent health care arm. The division, Amazon Care, which will close by year end, has failed to gain significant market share. The move comes a month after Amazon agreed to buy a larger competitor, One Medical, for $3.9 billion.

Social networks remove a pro-U.S. influence campaign. Facebook, Twitter and WhatsApp were among those that took down a nearly five-year operation to promote U.S. foreign policy interests abroad, researchers found. The campaign didn’t appear to have gained much traction.

Retail investors using some of the most popular brokers and investing apps may be spending billions of dollars annually on invisible costs, new research shows. A team of finance professors, led by Christopher Schwarz of the University of California, Irvine, executed 85,000 trades — using their own money — from December to June through five retail brokers: E-Trade, Fidelity, Interactive Brokers, Robinhood and TD Ameritrade.

The good news: They found no evidence that the payment-for-order-flow practice negatively affects the price of executing a trade.

The study, which has not been peer-reviewed, sheds some light on the contentious practice, which has raised questions about conflicts of interest, competition and pricing. (At a conference in June, Gary Gensler, the S.E.C. chairman, previewed potential new market rules that would ostensibly add trading transparency for the investor.) Payment for order flow allows brokerages, like Robinhood, to make bulk execution agreements with market makers, like Citadel Securities, routing trades their way in exchange for a payment. The study shows concern is warranted, but it suggests that hidden price disparities could be a bigger worry for investors.

What’s behind the hidden costs: The study found that “actual retail price” can vary widely between market makers, and observed “an astonishing dispersion in the quality of price execution” for simultaneous identical trades. The researchers found that the six execution venues studied offered some brokers more competitive execution prices than others.

Payment for order flow may not be the devil it’s made out to be. Overall, the professors write, “there is no evidence that PFOF harms price execution.” Brokers with these arrangements did not pay more to execute trades. Still, the researchers contend, “systematically different execution prices at the same venues for identical trades originating from different brokers” suggests that market makers have outsize power in setting prices, and that investors should be made aware of that.

In aggregate, the price differences offered by market maker and broker, and broker and customer, could add up to tens of billions of dollars annually for retail investors, based on their estimates. They suggest that the S.E.C. require added disclosures from brokers to illuminate execution quality, and alert investors to this hidden cost.

Were economists wrong about the carbon tax?

After his work on the effects of global warming on economic growth, first published in 1992, the Yale economist William Nordhaus became a leading voice for a nationwide carbon tax. But the Inflation Reduction Act, the nation’s sweeping initiative to address climate change, is built on a different foundation from what he had proposed, reports The Times’s Lydia DePillis: The new legislation instead offers tax credits, loans and grants. That is making economists ponder why the professor was so focused on a solution that ultimately went nowhere.

A central shift in thinking is that climate change has moved faster than foreseen, and in less predictable ways, raising the urgency of government intervention. Technologies like solar panels and batteries are getting cheap and abundant enough to enable a fuller shift away from fossil fuels, rather than slightly decreasing their use. “There was an idealization and simplification of the problem that started in the economics literature,” said Robert Kopp, a climate scientist at Rutgers University.

Dr. Nordhaus’s model has drawn criticism for underestimating climate change’s havoc. It also relies on broad assumptions and places less weight on harm to future generations than on people today. Dr. Nordhaus dismissed the criticisms as “subjective and based on selective interpretation of science and economics.”

Many economists think there’s still an important place for carbon pricing and subsidies. Subsidies can be viewed as a variant of pricing policy: They effectively raise the cost of fossil fuels relative to renewable alternatives. Only recently did the supply of those alternatives reach the point where a tax credit would make the difference, on a large scale, between buying an electric vehicle or not.

Studies into the effect of climate change on economic performance are becoming more important in an era of superstorms and long droughts. The Congressional Budget Office, for example, has begun to look at the relationship between extreme weather and federal revenue.

​​“This is a space where having more models early on would be better,” said Carter Price, a mathematician at the nonprofit RAND Corporation. “Rather than, someone has an assumption, that assumption goes into a model, nobody questions it and 10 years later, we realize that assumption is pretty powerful, and maybe not right.”

“You try again and then eventually you give up if you can’t get it to work. That’s where I maybe say, ‘You know what, just give me your cellphone number.’”

The toll of war in Ukraine

Russia’s invasion of Ukraine has prompted Europe’s biggest refugee crisis since World War II, according to the United Nations. It has also spurred a surge in food and energy prices, pushed the global economy to the brink of recession and walloped the markets.

Here’s a quick snapshot of the war’s toll on key asset prices over its first six months:

Europe is also being slammed by a sinking euro and sky-high natural gas and crude oil prices. Add it up, and the eurozone is far closer to recession than the U.S.

The Pros and Cons of Congestion Pricing in Manhattan