But the Midgard Forest Camp is in Kyiv, in wartime Ukraine, and when the air was pierced by a warning siren, the children knew what to do, abandoning their jump ropes and tennis games and dashing for safety.

It is a routine as familiar as lunch.

War has brought a new reality to Ukrainians, but some things still hold true, and as the weather warmed, some parents were faced with the perennial question: What should we do with the kids this summer?

With children isolated and deprived of social contact — some driven by fierce combat to flee their homes — schools and camps began springing into action to offer programs.

Parents considering sending their children to the Forest Camp, which is run by the Midgard School, may once have asked about counselor-camper ratios or art programs, but on Feb. 24, when Russian forces surged across the border into Ukraine, all of that changed.

“My first question to the school was whether they have a shelter,” recalled Nataliia Ostapchuk as she dropped off her 6-year-old son, Viacheslav Ivatin, one recent morning.

Yes, it does, and when the siren went off the other morning, that is where the campers headed. 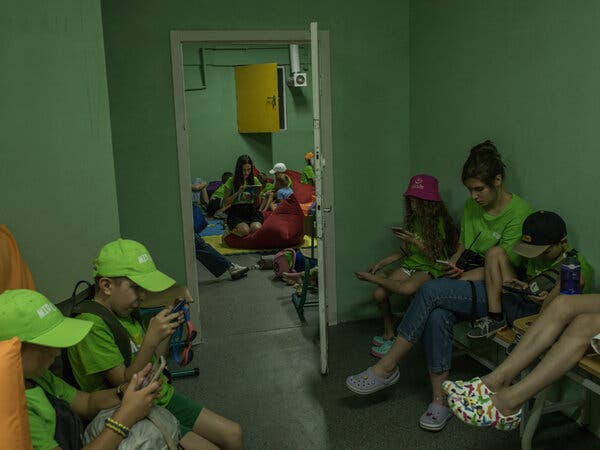 For children at the Forest Camp in Kyiv, time in the basement shelter has become just another part of their day.

When the all-clear is given, ordinary camp activity quickly resumes.
After spending an hour in the shelter, Alisa Mishkina, 7, found a better use for her time.

The children spent about an hour in the basement shelter, and for the most part, they took it in stride.

The shelter covers about 5,000 square feet, and given the frequency with which the children must go there — at least once a day — the school has equipped it well. Beyond the tables and chairs, there are toys, table games, television screens. There is also an air-supply system, toilets, showers and Wi-Fi.

“I don’t feel like I’m in a shelter,” said Polina Salii, 11, whose family fled the fighting in Pokrovsk, a town in the east.

Back in Pokrovsk, her family would race down to a basement repurposed as a shelter, with canned food, porridge and liter bottles of water.

“When there was shelling in the distance,” Polina recalled, “we spent the whole night there.”

The campers soon seemed to forget their basement surroundings, content to spend time with their electronic devices as their parents were sent text messages of reassurance. But when the siren wound down, the children responded joyfully, climbing the stairs to resume their day.

At least, until the next siren goes off.

The Midgard School opened in 2017, and as in past years, when summer came, it transformed into a camp.

This summer, the camp offers a 50 percent discount for the children of Ukrainian military members, many of whom are deployed on the front lines far to the east. About a third of the campers are from internally displaced families, who attend at no cost. And the campers no longer go on day trips off campus. They need to stay close to the shelter, in case the siren sounds.

Many of the families of internally displaced campers arrived with little more than they could carry. The school has also provided housing for three families that fled the fighting in the east. They are living in what is ordinarily the kindergarten building.

Oleksandra Salii, 15. Her family fled the fighting in eastern Ukraine and is one of three being housed at the Midgard School.
The camp is working with a local charity to provide food to displaced Ukrainians.
Polina Salii, 11, Oleksandra’s sister, at the entrance to the shelter.

Five years ago, when her son was born, Maryna Serhienko decided that Kyiv, Ukraine’s capital, could use a family development center. So she founded one. She called it Uniclub, and it offered community members a kindergarten, a summer camp and a gym where mothers could bring their children.

Like the Forest Camp, Uniclub recast itself after Ukraine was invaded.

“When the war started, we organized a shelter,” said Ivan Zubkov, Maryna’s husband, who helps her manage the center. “Families with their children — and even pets — were living in the shelter room.”

Public kindergartens are not open this summer in much of Ukraine, but Uniclub has 25 children in its kindergarten and 12 in its camp.

It has also offered services for children displaced from Mariupol, the eastern city that was brutally besieged by Russian forces. Uniclub provides clothes for those who need them, along with discounts and tuition waivers.

Uniclub campers at a playground in Kyiv.
The Uniclub center allows women to bring their children to workout classes.
Campers preparing to go for a walk in the city.

Some families have landed at Uniclub to escape fighting elsewhere in Ukraine — if only as a way station.

Many have moved on and, with no prospect of a cease-fire in sight, some have left Ukraine altogether. Their pets were another story.

“Now we have a lot of guinea pigs, birds and even a turtle that we are taking care of,” Mr. Zubkov said.

Nap time was over for this Uniclub kindergarten class, but not for Sviatoslav Kravchuk, 4.
Left behind by its former owners, a turtle found a home at the center. It is just one member of an impromptu menagerie.
Many kindergartens in Ukraine are closed this summer, but the center was able to keep its classes open.

It might once have seemed an unfathomable summer activity, but Ukraine itself has become unfathomable, and so a program to teach children how to reduce the risk from mines suddenly does not look so odd.

The class is put on by Soloma Cats, a charitable foundation that works with specialists from the State Emergency Service and the National Police. Over the course of a week, in five districts of Kyiv, children and their parents are offered safety lessons about mines and unexploded ordnance.

Though Russian forces pulled back from Kyiv after early efforts to take the capital failed, areas around it were occupied, and when the invaders withdrew, repositioning themselves for an assault on the east, there were reports of mines and booby-traps left behind.

“Today, more than 100,000 square kilometers of the territory in Ukraine is mine-contaminated,” the charity says. “Children and adults all need to know how to react if they find a dangerous object.”

A display of ordnance at a safety course for children in Kyiv.
The simple pleasures of childhood have been tainted by war. Tunnels at a playground in Kyiv.
Many children from war-torn parts of Ukraine have found themselves suddenly living in new cities. Andrii Levochko, 5, whose home is in Melitopol, with his grandmother at a park in Kyiv.

The war has taken a heavy toll on the children of Ukraine.

Many have been uprooted from communities turned into killing fields. Many have lost family members to the fighting. And many have themselves been killed.

This past week, the Ukrainian authorities announced that since the beginning of the Russian invasion, at least 358 children had died and 693 children had been injured.

Not many children remain on Ukraine’s front lines. Most have been taken out of harm’s way, to centers for internally displaced people or out of the country.

But some parents have been reluctant to leave, or to allow their children to do so. And so camp or any summer program all remains at most a distant dream. The goal is simple survival.

“I know it’s not safe here,” said one mother, Viktoriia Kalashnikova, who stood near her 13-year-old daughter, Dariia, in a courtyard of Marinka, in the east, as the town came under fire. “But where to go? Where to stay? Who will take us? Who will pay?”

A first-grade classroom in Kramatorsk, in eastern Ukraine, a day after it was hit by a Russian strike last month.
Viktoriia Kalashnikova and her daughter Dariia, 13, receiving donated food in Marinka.
Stepan Shpak was 2 and a half years old when Russian forces shelled his village near Kyiv. A toy truck now marks his grave.

Even those who make it out of the fighting can find every day an ordeal of uncertainty.

In Kyiv, Ihor Lekhov and his wife, Nonna, recounted fleeing Mariupol with their parents and their three children. With Mariupol now in Russian hands and their old home partly destroyed, the family has been living in the capital since March.

But they have found welcome in Kyiv — and even a summer program for their children. Uniclub took the two older boys in at no charge.

“In the camp, there are sport and team games,” said Maksym Lekhov, 12. “I like to walk and play outside most of all, but also I like to join group classes.”

Still, there is something he would like even more.

The Lekhov family on a walk in Kyiv to feed the ducks.

In the Philippines, Blinken Vows to Strengthen Military Ties