Good morning. It’s Friday. Today we’ll look at a little-known softball league made up largely of workers from the city’s museums. We’ll also get an update on the Gateway tunnel project from New Jersey to Midtown. 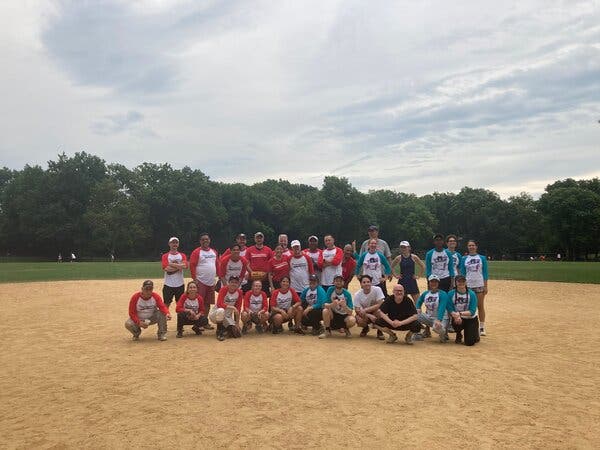 Credit…via The Metropolitan Museum of Art

Labor Day weekend may mark the winding down of summer, but for New York baseball fans, the rooting for home teams is just ramping up: Both the Mets and Yankees may be blazing their way to the playoffs.

Playoffs wrapped up this week on the ball fields of Central Park for a group of more obscure teams. They play in the quirky Arts and Museums League of 13 squads from New York City museums and cultural institutions.

These players spend their days curating exhibitions, handling art and assisting museum visitors. But summer and fall evenings are for softball in the park.

Many teams in the league, which has been around since at least 1940, have catchy names pegged to their institution.

The Starry Knights: A nod to Van Gogh

The squad from the Museum of Modern Art is the Starry Knights, a reference to the famous Van Gogh painting on permanent display at the Modern.

The Solomon’s Sluggers represent the Solomon R. Guggenheim Museum. If you happen to hear chants of “Let’s go, Mets” coming from the North Meadow fields of Central Park, it is most likely for the Mets from the Metropolitan Museum of Art, not Flushing, Queens.

Now batting, for the Whitney Houstons

The Whitney Museum’s team, the Whitney Houstons, was formed in 2011 and adopted the singer as its inspiration only months just before she died in 2012. The name remains, and so does Ms. Houston’s image on the team uniforms.

A non-museum team — the public television station Channel 13 — plays in the league because of their nonprofit cultural institution status. Known as Thirteam, they went undefeated this season and beat the Starry Knights this week to become league champs.

For the Whitney Houstons, a team tradition includes playing the recording of “The Star-Spangled Banner” that Ms. Houston famously performed at Super Bowl XXV in 1991. A shuffle of Ms. Houston’s pop tunes continues during the games.

“She’s the soul and the sound of the team, for sure,” said Benjamin Lipnick, the team’s captain and first baseman, as well as assistant director of tourism in the Whitney’s marketing department.

Before a recent game, a team member played Ms. Houston’s 1987 hit “I Wanna Dance With Somebody (Who Loves Me)” on the cornet.

Mr. Lipnick’s second-inning home run on Wednesday night against the Little Line Highlanders — a team combining the High Line and Little Island parks — helped the Houstons to an 11-9 victory and a final record of 5-8-1 to leave them in 12th place, right below the Carnegie Hall Haulers.

“We don’t win every game, but we have the best jerseys, and we have the most fun,” he said. Still, he added, they are no pushovers.

The team, which includes curators, art handlers and other staffers, prides itself on inclusiveness.

“On any given day, it’s someone’s first time out,” Mr. Lipnick said, adding that one staffer recently warned members that it was her first time.

Debbie Kuo, co-captain for the Mets, said the team is made up of “a motley mix of staff” that includes security guards, curators, administrators, art handlers and building maintenance staff.

The level of play varies widely from lifelong players to those like Ms. Kuo, who just took up the game when she joined the team as catcher last season.

“Now I can actually catch a ball, which is surprising to me,” said Ms. Kuo, senior manager in the museum’s Greek and Roman Art department.

Still, the Mets finished third in the league this season, with an 8-3 record.

The team’s results are included in the museum’s all-staff memos that go out to most of the 1,800 workers in the museum, which also invite staffers to cheer on the team.

Their tailgating parties at the field have less of a beer-and-chips vibe and more of a fondness for wine, cheese and charcuterie platters.

David Serkin Ludwig is a composer and the dean of music at the Juilliard School, which also plays in the league, as the Penguins. Mr. Ludwig plays right field. His office manager, Ashley De Peri, is the team captain.

Enjoy a sunny day near 80, New York. At night, it’s partly cloudy, with temps dropping to around the mid-60s.

In effect until Monday (Labor Day).

Delays for the commuter tunnel under the Hudson

It is one of the largest, most expensive and long-awaited transportation projects in the New York region, and now it seems it will take a bit longer and cost more, reports my colleague Dana Rubinstein.

It is the construction of a new tunnel linking New Jersey to New York, and the commission managing the construction, known as Gateway, says it won’t be finished until 2035, or three years later than expected.

The overall project, which includes both the new tunnel and the refurbishment of the old one, is likely to cost $2 billion more to construct, project officials said on Wednesday — or $16.1 billion, up from a previous estimate of $14.1 billion.

The 4.5-mile rail connection beneath the New Jersey Palisades, the Hudson River and Hudson Yards into Penn Station would bring sorely needed relief to the most congested rail link along Amtrak’s Northeast Corridor,

There is also grim news regarding that existing tunnel, a century-old rail tube connecting New Jersey to Midtown Manhattan.

The tunnel, heavily used by New Jersey Transit but owned by Amtrak, was damaged by Hurricane Sandy and will not be fully rehabilitated until 2038, three years later than planned.

He attributed at least $1 billion of the cost escalation to “market volatility and inflation.” And he said he believed that, going forward, that price tag would remain unchanged, within “an acceptable margin of error.”

“This is a massive tunnel with various component parts, and it is important to also know that it is a long project from a duration standpoint, and it’s also complex in scope,” Mr. Kolluri said.

“We’re building a project for a century,” Mr. Kolluri said. “We’re not building for the next four years.”

I was on the B train riding to work with a friend. We were chatting when the woman sitting next to us leaned over and asked us to stop.

“I’m trying to read my book.” the woman said.

“This isn’t a library,” my friend responded.

“No one else on the train is talking,” the woman said.

“No one else knows anyone,” my friend said.

By now, we had the attention of other riders sitting near us. My friend began to canvass them: “Do you know him? Do you know her?”

They all shook their heads.

After a pause, my friend and I quietly returned to our conversation.

When we got to Atlantic Avenue, the woman rose from her seat and went to the door.

As she was leaving the train, she turned back toward us.

Glad we could get together here. See you on Monday.

Melissa Guerrero and Ed Shanahan contributed to New York Today. You can reach the team at nytoday@nytimes.com.

A Constellation of Stars From the Latin Art World