Good morning. It’s Monday. We’ll look at why affordable apartments are in such short supply in New York. We’ll also look at a new player in the Mets’ lineup who’s hard to miss — and who, in only two weeks, has become a fan favorite. 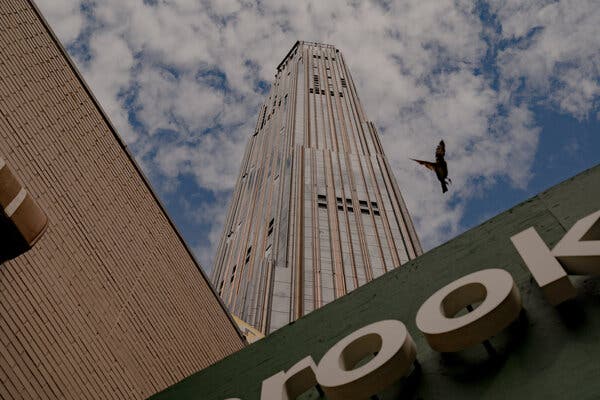 It sounds illogical to say that there’s a housing shortage in the largest city in America, but there is. More people want to live here than the city can hold, and that has driven up prices for the available apartments and houses. I asked Mihir Zaveri, who covers housing in New York, to talk about why it’s so hard to find an affordable apartment in the city — and what’s behind the affordability crisis.

Have rents climbed so high that middle- and lower-income people are wondering if they can continue to live in New York?

More than 50,000 people were staying in New York City shelters last week, according to a tally compiled by the news site City Limits, while tallies from the 1990s were closer to 20,000.

In 1965, the typical New York City household spent about 20 percent of its income on rent, according to a survey conducted by the city. From 2011 to 2021, that number was close to 35 percent.

The struggles seem clear. We talked to residents who have moved away from the city and who do not want to come back, as well as those who are considering moving away.

Yvonne Stennett, who has been the executive director of the Community League of the Heights, a community development group in Washington Heights, for more than 40 years, said that many longtime residents had been “pushed out,” as wealthier people moved into the area and affordable homes disappeared.

She summarizes the problem in four words: “The prices have jumped up.”

Almost anywhere you walk in New York, there’s construction. Is it keeping up with demand?

A Guide to Renting in New York City

Demand, which can be theoretical, is very hard to quantify. But most people agree that housing supply is not keeping up with demand.

A Washington policy and research group, Up For Growth, has estimated that in 2019, the New York metropolitan area needed more than 340,000 additional homes, based on patterns of household formation and vacancy data.

That shortage is fueled by years of sluggish construction compared with other American cities. The city has issued fewer building permits per resident over most of the past decade than Boston, Austin and San Francisco, according to a study from the Citizens Budget Commission, a nonprofit research group.

City officials also estimate that new housing is not keeping up with new job growth.

Why can’t state and local officials find solutions? What measures have been talked about to increase the supply of new housing?

State lawmakers this year considered and failed to pass at least four different measures to boost the supply of housing in and around the city: Bills that would have made it easier to build apartment buildings around mass transit and that would have allowed cities to legalize basement and garage homes died after opposition from lawmakers representing New York City suburbs. A bill that would have removed a state cap on residential building size also died in the Legislature.

And lawmakers let a contentious tax break that helped finance the development of big new apartment buildings, known as 421-a, expire without replacing or reforming it. The city and state have also long failed to retool the uneven underlying tax system that puts more of a burden on big apartment buildings than on smaller properties.

A bill that would have curtailed exorbitant rent increases — known as “good cause eviction” — also failed after pushback from landlord advocates.

It’s going to be another hot, humid day in the 90s. Thunderstorms may pop up in the afternoon and in the evening, when temperatures will drop into the 80s.

In effect until Aug. 15 (Feast of the Assumption).

What to call a new Met

On Friday, Stephen Merelman, an editor on Metro who is a passionate Mets fan, sent around an email offering a friend’s tickets to the first game of the doubleheader on Saturday. I emailed back that I couldn’t use the tickets but had been thinking about doing a piece for New York Today about one of the new guys in the Mets’ lineup, the one who’s hard to miss. After we went back and forth a few more times, I realized that Steve had written the story I wanted to read, by email. Here’s the finished version:

Throughout history, New York has been a stage for outsize characters who blow in from out of town. Damon Runyon, for example, was born in that other Manhattan — Manhattan, Kan. The Naked Cowboy, of Times Square fame, is from Cincinnati. The Mets have found the latest transplant: Daniel Vogelbach, who was born in Orlando, Fla., and arrived at Citi Field by way of Seattle, Toronto, Milwaukee and Pittsburgh.

He’s a 29-year-old designated hitter with a fast and compact swing and a physique that recalls the Stay-Puft Marshmallow man crossed with an Iowa-class battleship. Since his July 22 trade from the Pittsburgh Pirates, he has a .314 batting average and an on-base percentage of .478, thanks to his gift for drawing walks. On Sunday, he chugged home from first, scoring one of the Mets’ runs as they beat the Atlanta Braves, 5 to 2.

He is officially assessed at 6 feet and 270 pounds.

The Mets have had big men before, particularly Bartolo Colón, a pitcher and cult hero capable of startling athleticism, and Pete Alonso, the team’s first baseman, otherwise known as the Polar Bear. Vogelbach, however, has captivated fans in his early days with outward placidity and sudden action.

He lumbers out to the plate, barely constrained by his uniform. He watches unsatisfactory pitches whiz by with an imperious eye. Then … blammo! He makes Colón look like a ballerina. “I hit my home runs in bunches, just like I get my donuts,” he was quoted as saying.

In two weeks with the Mets, he has endeared himself to the fans. After the homer in the Mets-Braves game on Thursday, a somewhat bleary man in the row ahead of me in section 110 swiftly began workshopping nicknames.

“Vogey? How about Vogey?”

A suggestion of “Big Boy” — elegant in its simplicity, if I do say so — was ignored.

Will “House” stick to Vogelbach? MLB.com says our large lad already has a nickname — “the Babe.” In New York, that one’s still taken, by some guy who was born in Baltimore, trained on beer and hot dogs, and played in the Bronx.

It was my father-in-law’s birthday and I had already gotten the strawberry cheesecake. My husband was busy preparing a special birthday dinner. There was one thing missing: flowers.

I went for the corner bodega, chose two premade bouquets that looked happy and decided to get some more flowers to make a grand display.

I picked up a bunch of sunflowers and contemplated which green stems to buy to go with them.

“Don’t you have enough flowers?” someone behind me said.

Surprised, I turned to see an older man there on the sidewalk.

“I’m looking for some coordinating flowers,” I explained. “What do you mean?”

“You must have 35 stems in just one of those bouquets,” he said. “Why do you need more?”

I asked what he would be happy with if he were 94.

“I’d be happy with three flowers,” he said. “It’s the thought that counts, you know, and anyway, what would I do with so many flowers?”

He walked away, his wisdom hanging in the air and leaving me feeling silly.

The test of his advice came at dinner. Was he correct that less would be more?

Reader, the birthday boy was happy.

Glad we could get together here. See you tomorrow. — J.B.

Melissa Guerrero and Ed Shanahan contributed to New York Today. You can reach the team at nytoday@nytimes.com.

‘What a Horrible Place This Would Have Been’