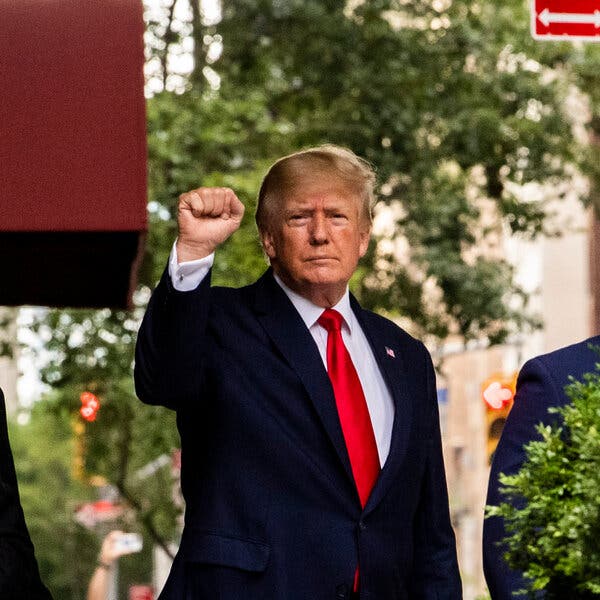 While I respect Mr. Brooks, I found this column especially troubling. I’m a criminal defense attorney who zealously and proudly defends the constitutional rights of his clients every day against the abuses by the government. But the day that any prosecutor in this country abandons his or her duty to follow the law because he or she is afraid of the consequences, as Mr. Brooks suggests, that is when we will truly be “living in a crisis of legitimacy.”

John Adams is still correct: Ours is a government of laws, and not of men. No one is above the law.

And Mr. Brooks’s consistent drumbeat about the perception that America is being ruined by “corrupt coastal elites” has worn especially thin. I live in “flyover country,” and I’ve grown more than weary of this notion.

David Brooks, much as I hate to say it, your question is on point. The newfound momentum of President Biden’s great week has been lost. The Trumpinistas are in full national fury. The extreme “unelectable” Republicans whom the Democratic Party has helped push to the fore are more likely to be elected, meaning that even if Donald Trump loses, his people could steal the election anyway.

What else is there to say but “Hail Caesar”? I can’t tell you how much I hate writing those words. But like James Comey in 2016, the feds have yet again bungled into shifting an election in favor of Mr. Trump! Awful. Just awful. That’s how it looks to me.

David Brooks’s column was distressing to read. Not because what he writes is true, but because he gives fuel to those who deny that Donald Trump has done anything wrong. It’s as if we are supposed to understand the grievances of Trump supporters, many of whom disdain those of us living on the East or West Coast because we are “elite” and out of touch. I am offended by this caricature.

If anyone but Donald Trump had retained classified government documents, there would be no outrage about the F.B.I. raid. There would be outrage at the person who appears to have defied the law and, most definitely, the norms. Why do even good people, like Mr. Brooks, try to rationalize the reasons for why so many people support Mr. Trump, despite his outrageous actions? We shouldn’t vilify those who still support Mr. Trump, but neither should we consider not doing what must be done only to avoid antagonizing them.

Mr. Brooks needs to look at this through a different prism. We can’t ignore horrendous and dangerous behavior just because to deal with it appropriately risks further division.

I wish that David Brooks and other columnists would stop repeating the canard about the network of coastal elites, presumably liberal, running our country for their own benefit.

The truth is that the country is divided because we have an elitist like Mr. Trump, with a huge megaphone, lying repeatedly to the American people while fomenting a treasonous assault on our Constitution, while other Republican members of the elite either echo his lies or spread their own havoc on our government institutions.

As his column demonstrates, David Brooks can’t quite decide if he a philosopher observing the messy political scene from afar or if he is a tough-minded political analyst sorting out the most recent intractable problems. Telling us that holding Donald Trump accountable for his unlawful and apparently deliberate possession of highly classified documents raises thorny challenges doesn’t get us very far.

Pick a side. Do we let Mr. Trump walk yet again for an act that would land almost anyone else in front of a jury, or do we charge him and run the risk that some of his fanatical supporters will engage in acts of violence? That shouldn’t be a hard question even for a philosopher.

In his probing essay about the implications of holding Donald Trump accountable for any crimes he may have committed, David Brooks writes, “We’re living in a crisis of legitimacy.” True, but the crisis is not about “distrust of established power” and “elite actors.” The crisis concerns the exact thing about which Mr. Brooks vacillates: absolute equality under the law.

Our justice system, where the very rich and powerful can game the system by hiring fleets of lawyers to delay, obfuscate and evade the workings of the justice system, while the middle class and especially the poor are cruelly incarcerated, for example, for not paying overdue traffic fines, is a national disgrace.

If Mr. Trump, who for years well before his presidency has played fast and easy with the law, is allowed to walk free despite overwhelming evidence of serious crimes, our country will have lost its very reason for being.

Honor the Victims of the Munich Olympic Massacre

Ankie Spitzer, at her home in Israel last month, held a framed photo of her husband, Andrei, who was killed in the 1972 attack.Credit…Maya Alleruzzo/Associated Press

It is disheartening that 50 years after the 1972 Munich massacre, in which Israeli Olympic athletes were murdered by Palestinian terrorists, the victims’ families have still not received adequate compensation.

It is equally appalling that the International Olympic Committee still does not understand the importance of dedicating a time during every Olympic Games to honor the victims.

The Olympic value of building a better and more peaceful world requires all of us to stand up against acts of hatred and antisemitism and to remember those who lost their lives because of them.

But it is not too late. The committee can step up and make a minute of silence a permanent part of the opening ceremony of every Games. We hope that the committee’s members will realize the importance of such a gesture and that at the Paris Games in 2024 we witness the start of a powerful new tradition.

Naomi Adler
Rhoda Smolow
The writers are, respectively, the C.E.O. and the national president of Hadassah, The Women’s Zionist Organization of America.

We continue our magical thinking and perpetuate our illusions about the economy and our economic system each time the jobs reports are released.

All the jobs in the world have neither meaning nor substance if they do not pay a living wage or provide benefits or opportunities for advancement. Millions of American households would be in an economic crisis should they encounter a $900 emergency. Full stop.

Home sale prices and rental market figures are off the charts and are breaking people financially. Jobs for real people are being eliminated with automation, artificial intelligence and so on.

We play a shell game with our economic reports and indicators while those in the middle class slip into lower economic rungs and those near the bottom fall into poverty.

Unless and until we face the realities of our economic system, we will continue to head toward what amounts to a modern-day feudal system in this country.

Political Test for Gavin Newsom: Whether to Sign Injection-Site Bill