Jason Seaman, a seventh-grade science teacher in Noblesville, Ind., was helping a student with a test when a classmate returned from the bathroom, drew a handgun from his pocket and began firing.

Mr. Seaman, now 34, threw a mini basketball at the student and then charged, swiftly disarming him.

“There was no choice — it was either do something, or die,” he said in an interview on Tuesday, recalling the shooting in May 2018 that left him with gunshot wounds in the abdomen, a forearm and a hand. “So when you’re in that literal life-or-death situation, I’m dang sure I’m going to fight.”

“Run, Hide, Fight” became the federal guidance on how to react to an active shooting after the massacre at Sandy Hook Elementary School in 2012, with Americans encouraged to consider confronting a gunman if they cannot safely flee or stay out of sight. In the years since, it has been drilled into Americans’ heads in schools, in workplaces and in private training sessions, a bleak mantra for a nation with hundreds of millions of guns and where mass shootings have become an ever-escalating plague.

Advocates for stronger gun laws contend that no American should have to put their body on the line in the face of a gunman armed with military-style weapons at a dance hall, a religious service, a mall, a high school.

But in high-profile massacres in recent months, the last resort to fight has been taken up by bystanders, who have attacked gunmen and stopped them before they could continue.

In Colorado Springs in November, two bystanders, including an Army veteran, physically subdued an assailant who had entered a nightclub and killed five people in a matter of seconds. In suburban Indianapolis last summer, an armed bystander fatally shot a gunman who had already killed three people in a mall food court. And in the midst of the mass shooting last weekend in Los Angeles County, the authorities said, an employee of a dance hall wrestled an assault pistol out of the gunman’s hands. 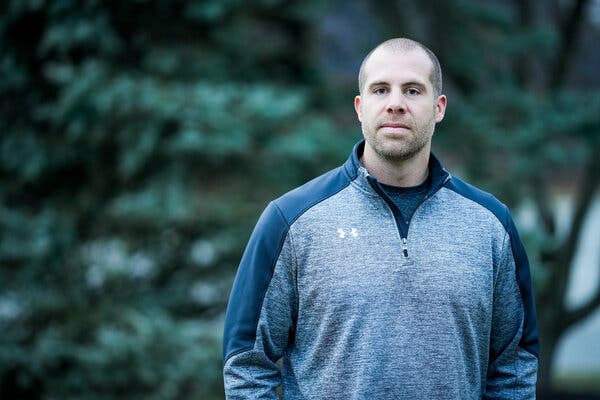 Jason Seaman, a teacher in Indiana, fought back against a student who opened fire in the school where he works. Mr. Seaman was shot in the abdomen, a forearm and a hand.Credit…AJ Mast for The New York Times

“This could have been much worse,” said Sheriff Robert Luna of Los Angeles County.

Experts say that bystander intervention in active shootings ends the threat in a significant minority of cases, and the forces that drive people to intervene are varied. But in many situations, bystanders are unable to run or hide, trapped in classrooms or churches with attackers who are armed with high-powered weapons.

Gun massacres at Marjory Stoneman Douglas High School in Parkland, Fla., the Pulse nightclub in Orlando and Robb Elementary School in Uvalde, Texas, are all examples of shootings where police officers or school security personnel were criticized as being slow to help civilians once a shooting was underway. Some Americans confronted by an armed assailant in more recent incidents have understood instantly: They are on their own.

“I feel like people are starting to come to the realization that the only one who’s going to protect you is you,” said Jack Wilson, a county commissioner in Hood County, Texas, who teaches concealed-carry classes. “People have to be willing to intervene to stop these kinds of issues.”

He was one of those bystanders: In 2019, Mr. Wilson was attending Sunday services at his church in White Settlement, Texas, when a gunman opened fire, killing two people. Mr. Wilson pulled out his own gun and fired, killing the assailant with a single shot.

“The only way law enforcement is going assist you is if they’re in your driveway,” he said. “That’s not a slam against law enforcement. They can’t be everywhere.”

Deputizing the public as a tool of last resort has not caused the pace of mass shootings to slow down. Already this year, at least 69 people have died in at least 39 separate shootings in which four or more people were injured or killed, according to the Gun Violence Archive.

“If anyone’s saying, ‘I’m hearing more about active shooters being tackled or stopped by civilians,’ it may be true that is occurring more often,” said Adam Lankford, a professor of criminology at the University of Alabama. “But it could be a function of there being more total attacks.”

Sometimes, bystander interventions have been met with tragic consequences. In 2019, Riley Howell, a student at University of North Carolina at Charlotte, was shot while trying to stop a gunman, though he managed to charge the assailant and pin him down. Mr. Howell, a 21-year-old former high school soccer goalie, died in the attack.

A memorial at the University of North Carolina at Charlotte in 2019, where Riley Howell died stopping a gunman.Credit…Travis Dove for The New York Times

Advocates for stricter gun laws said that outsize attention on bystander interventions in mass shootings could distract from the deeper issue of the country’s unrelenting cycle of gun violence.

“Instead of focusing on why these tragedies keep happening, we focus on the heroic acts of the bystander,” said Shannon Watts, the founder of the gun-control organization Moms Demand Action. “We should always call a hero a hero and thank them for selflessly putting their life on the line. But it makes me so angry that we never stop to think about the fact that we shouldn’t be asking average civilians to be heroes. I don’t want my husband or my children to have to be heroes.”

Ms. Watts pushed back against responses to mass shootings that call for more people to be armed with more weapons, noting that America has a gun homicide rate that is 26 times that of its peer nations.

“There are 400 million guns in this country,” she said. “If guns made us safer, we’d be the safest nation in the world.”

During unfolding attacks, colleges and police departments now sometimes post on social media urging people to “Run, Hide, Fight,” and the phrase has become a staple of active shooter training sessions offered at schools, businesses and religious venues. The phrase, which the federal government adopted from the city of Houston, has caught on.

Katherine Schweit, a former F.B.I. official who helped develop the federal guidelines, said training with that philosophy allowed people to think through how they might want to respond long before they encountered a gunman.

“No one should ever be told you must fight — you can’t ask that of anybody,” Ms. Schweit said. “But you can talk to them about how people have survived, and not in small numbers. A lot of people have survived when individuals have taken it upon themselves to intervene.”

Jeffrey Kranz, the assistant police chief at Marquette University in Milwaukee, said “Run, Hide, Fight” training was now required for incoming freshmen. But most of them, he said, had already received similar advice growing up.

“It’s the modern-day fire drill that we went through as kids,” Chief Kranz said.

Chief Kranz said he had been teaching active shooter response for about 15 years. But in recent years, he said, he has been struck by the increasing number of students who tell him that they had a direct connection to a mass shooting.

Lai Lai Ballroom & Dance Studio in Alhambra, Calif., where an employee tackled a gunman who had already killed and injured dancers at another ballroom.Credit…Mark Abramson for The New York Times

Edward Davis, a former Boston police commissioner who was head of the department at the time of the Boston Marathon bombing, said that there had been a shift in thinking from Americans trying to head off mass shootings and rampant gun violence.

“People now think differently not just about being in public spaces but private spaces, as well,” he said. “People have a self-preservation gene, and that gene has gotten stronger. It’s turning into a Wild West survival mentality.”

“I haven’t carried a gun since I retired in 2013, but I’m thinking about doing it again when I’m out in public,” he said.

Mike Wright was the manager of the Luca Pizza di Roma in a Greenwood, Ind., shopping mall in July 2022 when a gunman emerged from a bathroom and opened fire, killing three people before he was fatally shot by an armed bystander, Elisjsha Dicken, who was carrying his 9-millimeter handgun.

Mr. Wright praised Mr. Dicken as a “hero citizen” who saved lives but said those, like himself, who had survived were still changed. “It’s nothing you ever expect to go through, but now we live in a heinous world,” he said. He added: “Since then, I watch my back more. You never know when someone is going to pop up.”

Guy A. Relford, an Indiana lawyer who focuses on Second Amendment issues, represents Mr. Dicken. Mr. Relford said the effect on those hailed as heroes can be intense, too.

“Generally, from representing people in his situation, it’s a profound thing and a tough situation to deal with,” he said. “Any person who values human life is going to be impacted by making that decision.”

Americanshave increasingly turned to active shooter training to learn strategies for surviving an attack. In Odessa, Texas, on Tuesday evening, a small group of residents gathered at the Odessa Police Department for a session on how to react if confronted by a gunman.

The session opened with a graphic showing the increase in mass shootings across the United States, from the early 2000s to now.

Cpl. Steven LeSueur told participants it takes about three minutes for the police to respond to a shooting. What happens in those minutes can mean the difference between life, injury, or death, he said, and if people decide to fight, they need to be prepared.

Joanna Wright, 61, looked on with her family nearby. She was shaken by a mass shooting around Odessa in 2019, which occurred near her grandchildren’s home. She attended the course on Tuesday knowing that another shooting could always take place.

“It taught me to refresh my brain and always be alert because you never know where or when,” she said.

Tags
People Said That Was Who

2023’s Biggest, Most Unusual Race Centers on Abortion and Democracy

A Mass Shooting in California Targeted an Entire Family