This article is part of the Our City series, about how urban communities around the country use public and communal spaces to celebrate and spend time together.

Roy and Ida White’s offspring squeezed under the white canopy at Randalls Island Park, where three of New York’s boroughs meet, and smiled for the camera. Behind them hung a white banner decorated with 19 stick figures, meant to represent each of the Whites’ children. The group shouted “Family!” as the camera clicked.

Allison Ouko, 32, the grandchild who organized the reunion, stepped into the sun and took stock of the space her mother and brother had claimed at 7:30 a.m. on a recent Saturday. The tents had been propped up, and the coolers of water and Kool-Aid had been dragged from the cars.

Around 12:15, Ms. Ouko, a nurse practitioner, declared it was finally time to “get on the grills.” Soon her cousin, Christian May, a U.S. Army officer stationed in Georgia, grabbed metal tongs and took his place in front of the grill planted on the grass. Smoke wafted from the hamburgers and hot dogs.

“I finally was able to get some time off,” Mr. May, 25, said as the grill buzzed and funk music blared from speakers. “I was like, ‘Look, I want to go home. I want to see my family.’”

In New York, where people cram into round-the-clock subway cars that race from borough to borough, the sprawling public parks scattered across the city can be portals to another way of living. Forty of those parks, like Randalls Island, feature designated barbecuing areas, several of which have their own grills.

The smoke of the charcoal-powered grills carries the promise of grilled meats and vegetables as well as community. Every summer, New Yorkers from around the city bring their own food, language and customs to the parks, offering a window into the city’s varied cultures and cuisine.

Ms. Ouko had chosen her grill spot, a shady area with benches that overlook the Harlem River, because it presented a view of her family’s history. The Whites had moved to New York from South Carolina in 1938 to escape Jim Crow and eventually settled into a brownstone in East Harlem. The large family crammed into two adjacent apartments and called their residence the “Big House.” In the summers that followed, the group would march across the Triborough Bridge (now officially the Robert F. Kennedy Bridge)with shopping carts full of supplies to have picnics at Randalls Island.

“All the different personalities, all the people coming through, dancing, eating, just having a good old time,” Ms. Ouko said. “I can’t imagine what that must’ve been like, to experience that.”

She tried to recreate that energy on Aug. 13, the 10th anniversary of the death of her aunt Henrietta White, whose shoes she was trying to fill as family party planner. As more relatives arrived around 12:45 p.m., Ms. Ouko started to set up the corn hole and limbo sets. (While Ms. Ouko traveled from White Plains, N.Y., and others from the Bronx and Manhattan, some relatives came from Virginia, North Carolina and Alabama.)

It had been years since everyone was together, she lamented, and inflation had made organizing the reunion trickier. But Roy and Ida White’s granddaughter was determined. Her T-shirt read: “Ain’t No Family Like The One I Got.”

Three generations of Whites gathered on the southern tip of Randalls Island Park. Some family members hadn’t seen each other in years; others were meeting for the first time. They grilled hamburgers and hot dogs and carved up watermelons for dessert. 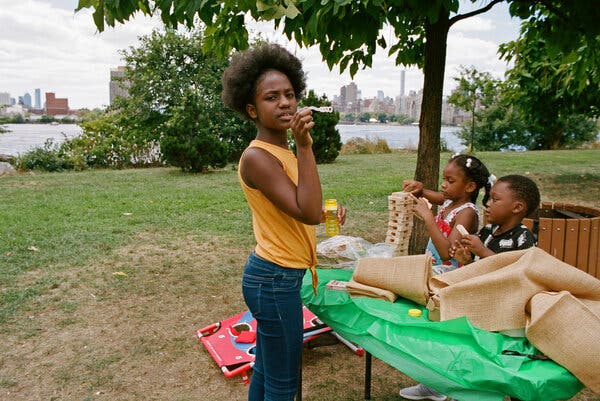 Taylar Reese, 11, blew bubbles as Chelsea Yearwood, 6, and Bryson Reid, 4, played Jenga. For the kids, the reunion doubled as a family history lesson.

Grilling was a group effort for the Whites. Several family members helped to set up and maintain the cooking area.
Genevieve White, 66, tried to keep cool amid the mid-80-degree heat. Ms. White was the 16th born of Roy and Ida White’s 19 offspring.
The Whites claimed their space at around 7:30 a.m., hoping to beat the late crowd.
Ramsey White, 41, hugged Arlene Hector-White, 68, as Isaac White, 71, surveyed the scene.

A few hundred feet from the Whites, Jon Barbosa, 44, and Victor Carreńo, 42, owners of Rehab & Design Construction Corp., hosted a cookout for their employees, most of whom are of South American descent. The company, based in Huntington Station, N.Y., had beaten a neighboring business in a friendly soccer game at the park earlier in the day.

Nicole Alvarez, 22, uses a grill fork to check on chorizo and other group favorites.
The combination of chorizo, arepas and steak made for a delectable aroma.
Despite thumping Latino music, the burning sun and the pungent smell of cooking meats, naps were possible.
For some, anticipation of the food outweighed the need for plates.
Mr. Barbosa was inspired by his boss to host the cookout. “When my employer used to do the same thing for me, it was nice. I felt so good. I felt appreciated,” he said.
The employees and family members enjoyed food, drinks and laughter in the shade. Eventually, a bottle of mezcal got passed around around the tables.
Some of the chorizo was prepared in a barrel-shaped grill. Grill masters and guests alike nursed Modelo Especial beers.

Across the East River, in Queens, members of the Dhokham Riwoche Kyiduk of New York and New Jersey Association, a Tibetan community organization, set up at Flushing Meadows-Corona Park for their annual Drupchoe Chenmo prayer celebration.

The Tibetan Buddhist ceremony dates back about 800 years to the establishment of the Riwoche Temple in Kham, Tibet.

The Drupchoe Chenmo ceremony incorporates the grill itself. After some chants, the men threw barley flour onto the grill to cleanse evil spirits.
The ceremony called for a concoction of milk, sake and whiskey to stoke the flame on the grill.
The Tibetan Buddhists hung out around the tent from around 9 a.m. to 9 p.m.
Father and son monks provided the soundtrack for the ceremony, with chants, cymbals, drums, horns and more.
The colored sticks represent the five elements of Tibetan Buddhism: fire, earth, metal, water and wood.
Karma Phuntsak, 35, cleansed the grill with flames after the final offering.
The potluck lunch included moments of levity.
Amid a park full of ice cream trucks, loud music and screaming children, the Tibetan Buddhists created a makeshift sanctuary.

The next morning, Vicky Paris, a lifelong resident of Brooklyn’s Dumbo neighborhood, arrived at McCarren Park at 7:30 a.m. to claim a grill on the corner of Driggs Avenue and Lorimer Street. As morning turned to afternoon, she became a cookout conductor, flipping shrimp-and-vegetable skewers, pushing tables together and fielding phone calls from tardy friends and family members.

Ms. Paris, who works 40 to 50 hours per week as a home health aide, took six calls over a 20-minute stretch, but she knew it would be worth it — even though her family ended up arriving late.

“Barbecuing is my thing in the summertime,” Ms. Paris, 36, said. “This summer I been working a lot more, so I did less barbecues this summer. But like I said, it’s the end of the summer. Time to go out with a bang.”

Ms. Paris grew up attending cookouts at McCarren Park after her father’s baseball games. Back then, people who went to parks needed to bring their own grills.
Ms. Paris was up until 3 a.m. that night preparing food for the cookout. After two hours of sleep, she set out for the park and claimed a prime location close to the pool.

How to Have Fun Again